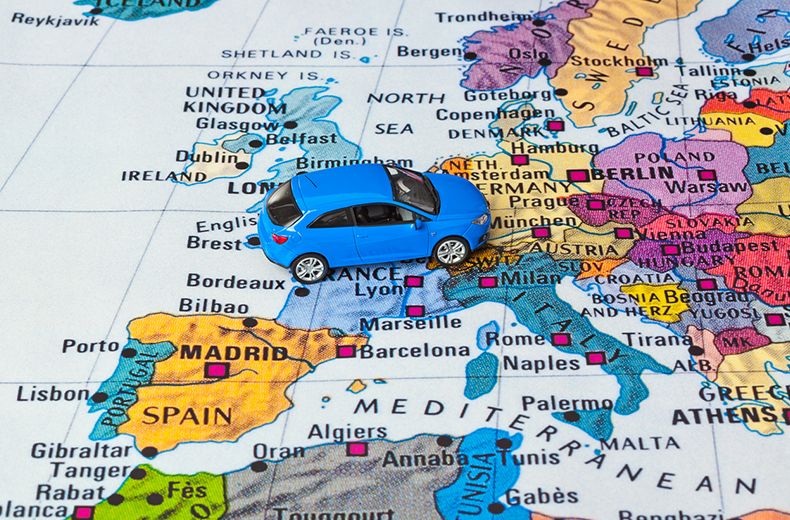 When driving in France, simply getting used to driving on the other side of the road can be tricky enough. On top of that, there’s different driving rules to contend with and new road signs that can at first prove difficult to decipher.

To help you drive safely on your holidays, we look at the meaning of some of the more confusing French road signs, as well as some useful French words and phrases that can help you along the way…

As in the UK, the shape and colour of French road signs can give you a good idea of what to expect:

Although there is a lot of common crossover between French and UK road signs, there are some important ones that could leave you scratching your head. We’ve had a look at some of the more confusing French road signs for UK drivers.

Junction ahead: give way

This slightly foreboding warning sign indicates that there is a junction coming up ahead and that you don’t have priority, so you should slow down and give way to the right.

In France they generally follow a system called ‘priorité à droite’ which gives the right of way to cars entering the road from the right. This even applies to some of the older roundabouts – so even if you’re currently on the roundabout, heading counter-clockwise, you’d have to give way to those joining the roundabout on your right.

Always look out for signs on your approach to any junction or roundabout and go slowly if you’re unsure.

Junction ahead: your right of way

Although very different in appearance, this warning sign also indicates that there’s a junction ahead but, in this case, you’ve got priority, so drivers turning into or crossing your road will have to give way.

If you see this upside-down red triangle with a white background, it means you’re coming up to a junction and need to give way – or as the French say ‘Cédez le passage’. You might see this phrase underneath the sign, or a number that indicates the distance remaining to the junction.

Confusingly, the ‘priorité à droite’ system doesn’t apply at all times. If you see this diamond sign with a white edge and yellow background you’re entering a ‘priority road’ which means you have the right of the way instead, and vehicles coming in from the right must give way.

The same sign with a black stripe across signals the end of the priority road and a return to the ‘priorité à droite’ system.

Priority on a turn

You’ll find different variants of this sign placed before junctions, to indicate who has priority when making a turn.

Pay close attention as they normally indicate intersections where the traffic going straight ahead doesn’t have right of way – such as in the example here, where any drivers turning right take priority.

The entire central of Paris is a ZCR and you’ll also find permanent and temporary ZCRs in other cities like Lyon, Strasbourg, Lille, Toulouse and Marseille, with more mooted for the near future.

To drive in these areas you need to display a ‘Crit’Air’ vignette – or clean air sticker – on your windscreen, or risk a fine. The Crit’Air stickers classify your car according to its euro emissions standard on a scale of one to six, depending on how polluting it is.

Depending on the number of your sticker you may not be able to drive in certain areas or at certain times of day.

Find out more about Crit’air stickers and how to get one for your car.

Turn your lights on / off

The phrase ‘allumez vos feux’ instructs you to turn on your lights because you are entering an area where driving lights are mandatory at all times of the day. The sign ‘fin d’allumage des feux’ marks the end of the mandatory lights zone.

Don’t forget to pick up some headlight beam deflectors and install them before your trip – you’re required to use these by French law unless you can adjust your beam manually. Our driving in France kits contain these deflectors along with all the other mandatory items you need to carry with you on your trip.

If you see this alarming temporary sign up on a French road it means there’s been an accident ahead that’s blocking the road and may cause severe delays.

In general, most French roundabout signs will be accompanied by a ‘give way’ sign or the words ‘Vous n’avez pas la priorité‘, which translates as ‘you don’t have right of way’. As in the UK, those driving in the roundabout normally have priority, but if you’re entering the roundabout remember you’ll be giving way to the left instead.

There are certain roundabouts in urban areas where drivers entering the roundabout have priority – but if this is the case it will be clearly indicated.

Unlike in the UK, where toll roads are few and far between and easy to avoid, in France toll roads are very common and you’ll have to pay to use the quicker ‘autoroutes’.

The sign ‘halte peage’ indicates you should slow down to stop because you’re approaching a toll booth where you’ll need to pay for the privilege of using the road ahead. You may also see a similar sign with ‘halte police’ or ‘halte gendarmerie’, indicating a mandatory police checkpoint.

Speed limit signs are the same in France and the UK, but it’s worth a reminder that the speed limit here is in kilometres per hour, rather than mph.

As a general rule, the speed limit in French towns and urban areas is normally 50km, and 90km on national roads, going up to 130km on the Autoroute.

This somewhat alarming looking sign is used to alert drivers carrying explosive or inflammable materials that their access is prohibited. You could expect to see this road sign ahead of a long tunnel, where recovery and emergency services access would be severely hampered.

These signs apply for people who might be carrying fireworks, gas canisters for barbeques, or fuel for their camping stoves, for example.