Your guide to Gritters (& how to pass them ) 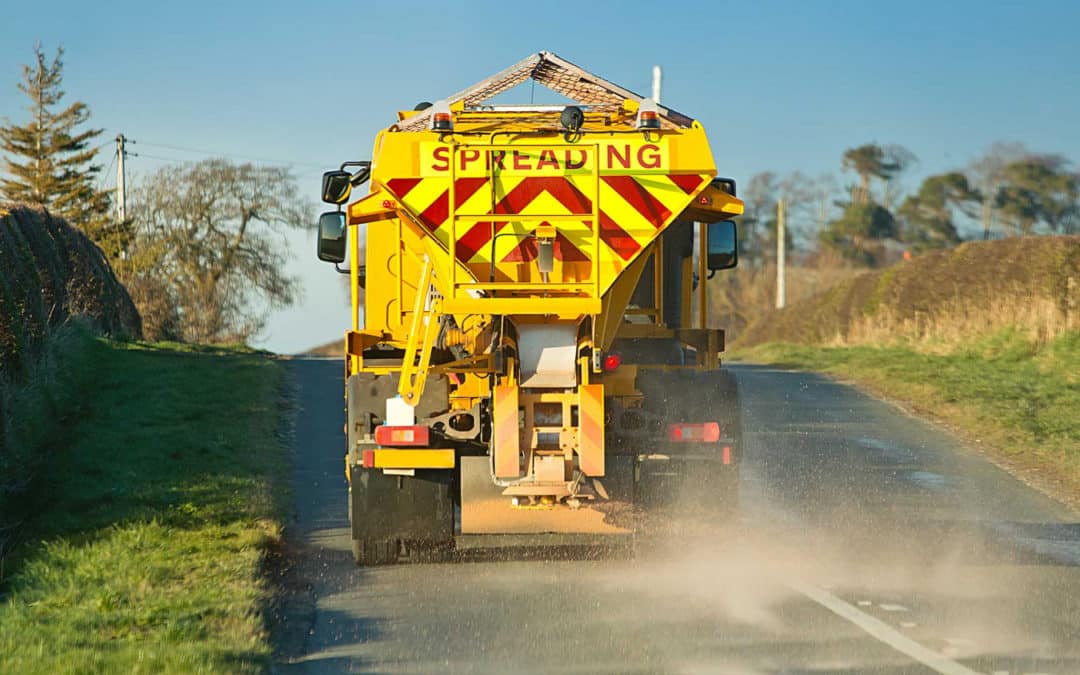 If you drive in winter you are likely to encounter a road gritter. For those who care for their cars, passing one can be terrifying: the noise and clatter are cringe-inducing.

But is it as bad as it sounds? Does passing a road gritter mean instant stone chips and damage to your car? And what’s the best way to pass a road gritter in order to minimise damage and maximise safety?

Here’s what you need to know when following a road gritter – including how to pass it with minimal risk to your vehicle.

What is road grit? 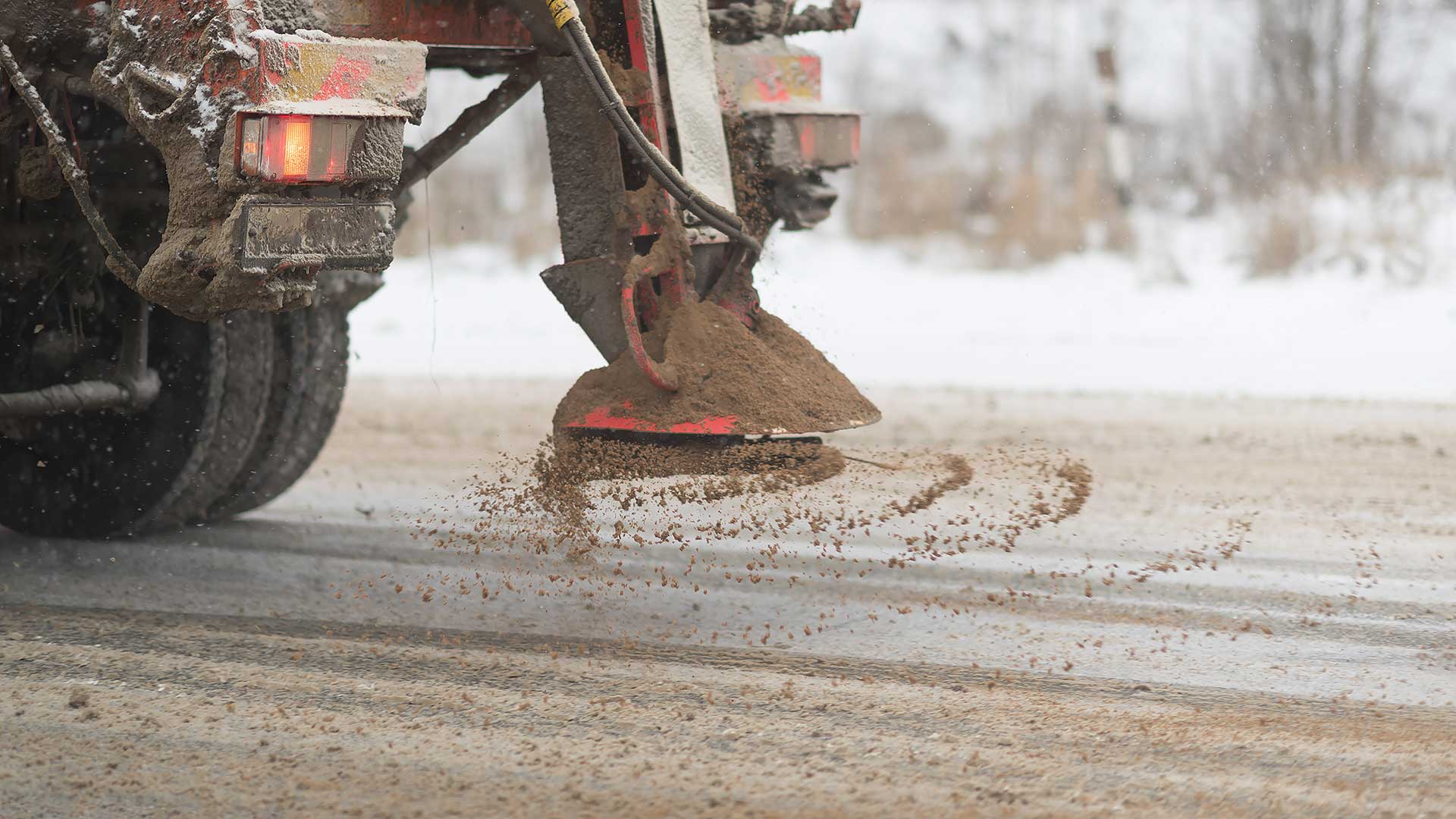 Don’t worry. Road grit is not actual ‘grit’. Years ago, it was a mix of sand, small stones and salt, but these days, rock salt is used. This is softer and less damaging than stones; the sound you hear is often the ‘splatter’ of salt rather than the impact of gritty stones.

Some authorities use a product called Thawrox+. This is a mixture of rock salt and a food-grade agricultural by-product produced in the sugar refining process. The manufacturers say it gives a smoother flow with less binding, so the spread pattern is more efficient. It also gives less ‘bounce’, so the spread rate can be reduced – again helping lessen the risk of damage to passing cars.

Sometimes, grit is ‘wetted’ before being spread, so it starts acting on the road surface more quickly. Again, this is less likely to damage passing cars.

Rock salt is largely mined in the UK from three huge mines deep underground. It is ground away by machines rather than by hand. Before being transported to stores, it is treated with an anti-caking agent.

How do road gritters operate?

The most efficient speed for gritting a road is up to 40mph. Gritters will try to stick to this speed, even on motorways. On three-lane carriageways, gritters will drive in the middle lane, so all three lanes can be treated equally.

Usually, when a gritter is spreading salt, its amber lights will be flashing.

Salt spreading is automated and adjusted by speed. When the gritter stops, it will cease spreading salt until it moves again. The equipment at the rear contains an ‘agitator’ to ensure salt is spread as evenly as possible.

Will following a road gritter damage my car? 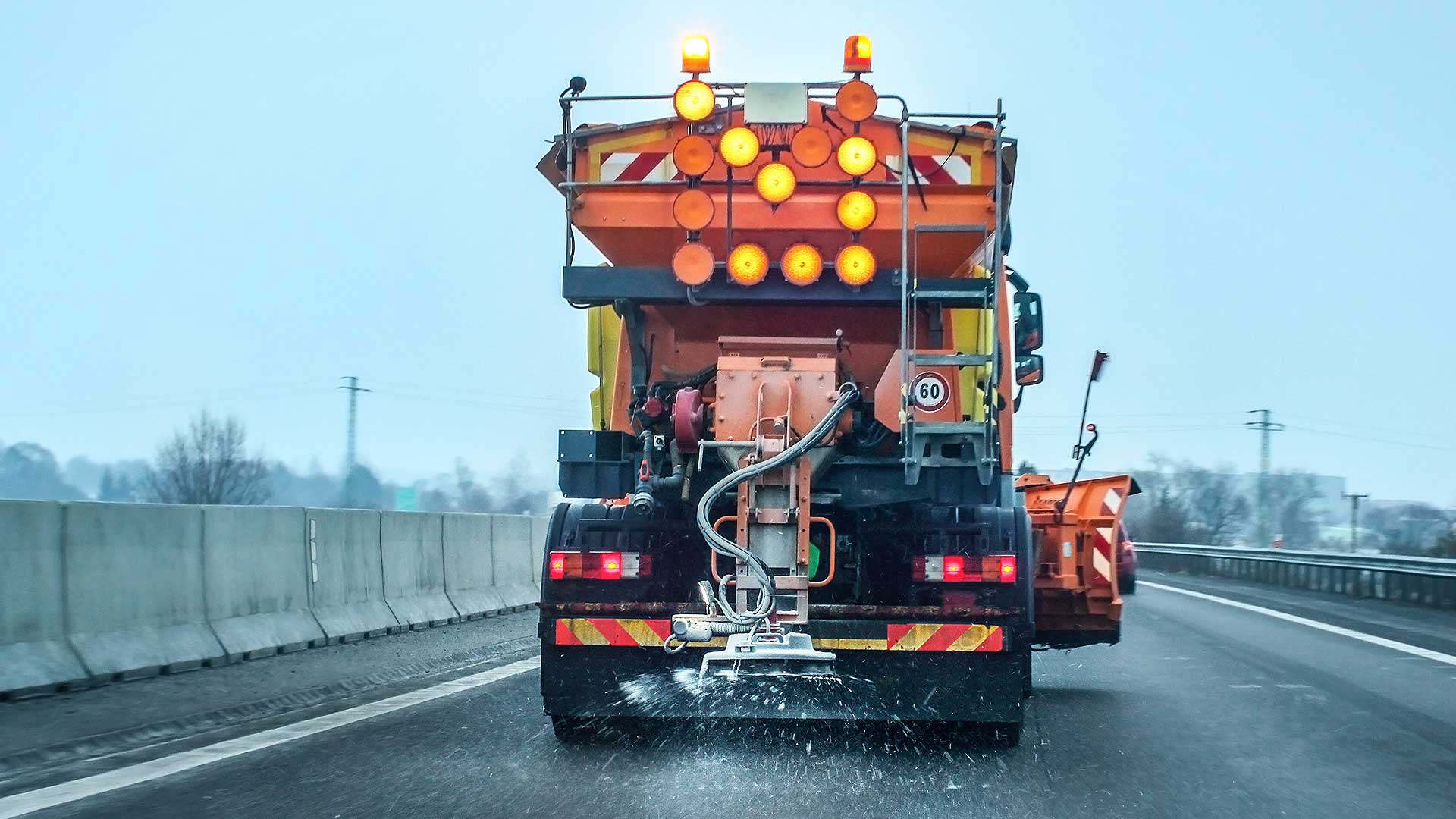 Yes, following a road gritter is a horrible sensation, and it sounds like your paint and windscreen is being chipped to pieces. But, thanks to a combination of the latest road grit and salt spreader technology, it often sounds worse than it is.

If you’re careful about how you follow a gritter, the risk of damage should be minimal. You just need to go about it in the right way…

What is the safest way to pass a road gritter?

The smartest way to pass a salt spreader is to minimise your time exposed to danger. In this case, it’s the spray of salt out of the rear of the vehicle. Therefore, hang back out of the way of the road grit and then, when it is safe and clear, swiftly overtake.

Your objective should be to minimise the ‘clatter’ noise you hear. If you’re on a single carriageway, leave a clear distance until you overtake; on a motorway, do the same, but without ‘lane-hogging’.

On four-lane motorways, gritters will often travel in the second lane. Experienced drivers will travel in the fourth lane with a second car in the third lane acting as a ‘shield’ between them and the gritter. It’s very satisfying when you manage it…

What can I do if I think a gritter has damaged my car?

The government has a guide for vehicle owners who think their car has been damaged by a road and want to seek compensation. However, it also has a disclaimer: “You can’t claim compensation if debris from another vehicle caused the damage. Contact your insurer instead.”

It is unlikely that any claim for chipped paint or broken windscreens you think has been caused by a road gritter would be accepted – although if you could provide clear evidence, such as dashcam footage, it could still be worth trying a claim.

How do I spot a road gritter? 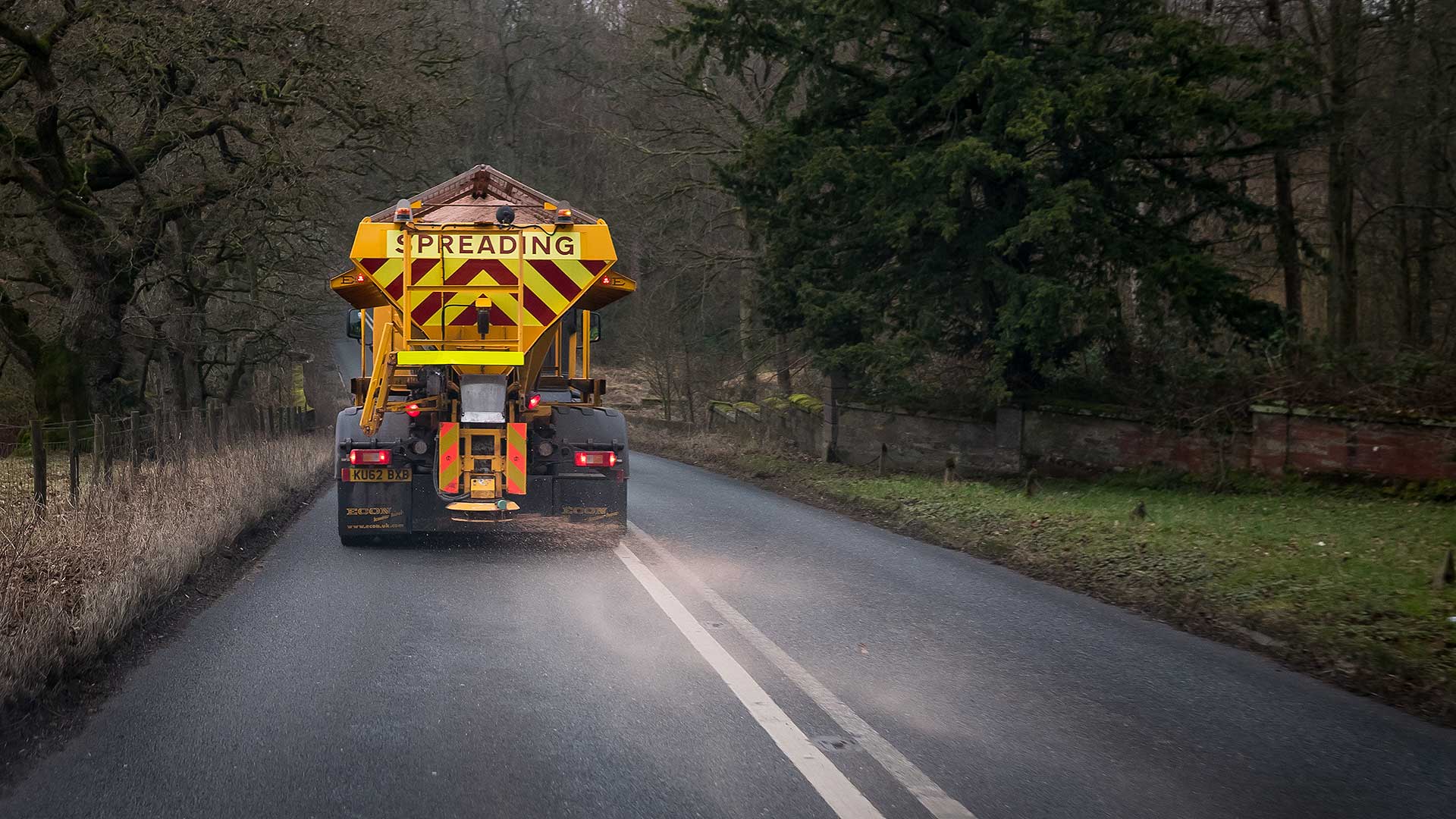 You would think spotting a road gritter would be obvious. Not so for some: last winter, there were nearly 40 incidents involving people driving into gritters. Often, the expensive salt-spreading equipment at the rear was damaged, taking that gritter out of action.

Following research with the Transport Research Laboratory, Highways England is now painting its gritters in one block colour: bright orange. This emphasises the ‘solid’ shape of the vehicle, which the research indicated would help salt spreaders stand out as much as possible.

How advanced are the latest road gritters?

Highways England is taking delivery of a new generation of road gritters built by Romaquip. They feature new technology that allows specific route information to be pre-programmed, using GPS.

This means salt is spread automatically, taking into account bridges, road features and other specific landscape details. It means salt isn’t wasted, drivers can fully concentrate on the road and, theoretically, there’s less risk of ‘stray’ salt being splattered onto cars rather than the road.

How many gritters does Highways England operate?

The UK’s biggest operator of road gritters is Highways England. It runs 535 winter vehicles to cover 4,400 miles of motorways and A-roads.

What should you not do when you encounter a road gritter?

Remarkably, Highways England says there are a growing number of instances where drivers are taking to the hard shoulder in order to avoid a road gritter.

Quite apart from being illegal, this is highly dangerous as stranded cars could be hidden from view, and also foolish: if the road is untreated, the area most likely to be icy is the unused section of the hard shoulder.